What is a Vacuum Coating? Its Origins and History

Let’s look at an overview of the development timeline, the basic principles behind the generation of thin films, and the introduction of thermal spray coatings.

A Brief History of Coating Technology

Coating technology has its influence in manufacturing worldwide and has existed since 1852. W.R. Groce observed the first instance of vacuum coating, and in 1857, Michael Faraday investigated the arc evaporation forming films.

In the early 20th century, the fundamentals of different coating techniques were investigated and the first commercially coated products, like aluminized reflectors or thin-film resistors, were introduced to the market in the 1930s. After the industrial push of World War II, technology boomed. To find the complete history, visit the History and Evolution of Thermal Spray Coatings. 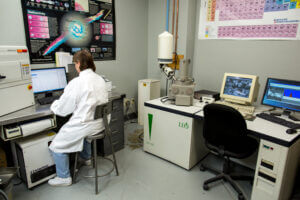 What are Thin Films?

A thin film is a layer of surface material with a thickness far below a nanometer and at most a micrometer. Thin films are utilized for a variety of reasons across numerous industries. A shortlist of examples include:

Thermal evaporation is the most mature technique and is initiated when a material is melted and evaporated at a high temperature. The vapor is then deposited on the targeted surface.

These technologies require a high vacuum of 10-07 to 10-05 millibars during the coating process. This is dependent on the size of the vacuum chamber and the desired quality of the layer. The first reason is to ensure a mean free path of evaporated atoms that’s much longer than the distance from the source to the target. The second reason is to provide a smooth, clean surface for the atoms to create a stable layer.

Today, thermal spray coatings are utilized in a number of different industries. These coatings consist of wire and molten powder which are exposed to plasma or oxy-fuel combustion. The fire from the spray device will power the mixture that has been heated, and once it has been sprayed onto metal, the mixture will retain a firm coating.